As part of my continuing investigations into spatial sound I created the sound art installation Sirens, presented during the CCRMA Fall 2017 Transitions concerts. This smaller piece is a step towards a larger work on the subject planned for early 2018. The piece explores music whose form exists primarily in space, rather than in time.

To achieve this, four speakers were embedded in a tetrahedral encasement, each pointing in a different direction. Each speaker emitted a separate constant sine tone. 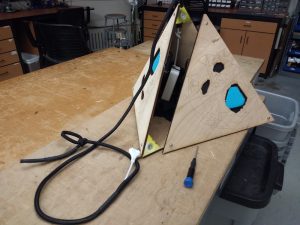 Each sine tone was given a frequency slightly apart from the others, with the four frequencies having differences like those between the notches of an optimal and perfect Golomb ruler. That meant that each pair had a unique frequency difference relative to all the other pair combinations, and the wave interference of these sine tones created a beating of different rhythm between each pair. 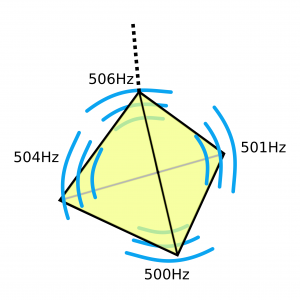 As the listener moved around the artifact, depending on their relative location, the four sine waves would mix differently. This resulted in a polyrhythmic beating that changed beat emphasis according to spatial location. From far away a soft steady hum was audible, but the closer the artifact was approached the more clearly the internal beatings became articulated.

The artifact was placed in the woods adjacent The Knoll hanging above a sloping hill, so that it could be approached from above or below and be walked around freely. At the start of a path leading to the location was a sign that read:

An artifact from an imagined culture, where sound and music are thought of as a primarily spatial phenomena, rather than one whose form unfolds through time.

Listen to the articulated rhythms created by the constructive and destructive combination of tones, as they interact differently in the space around the artifact.

Glad you liked it Assaf!